YOUTH ORCHESTRA A BIG NOISE THANKS TO CHRISTMAS CARD 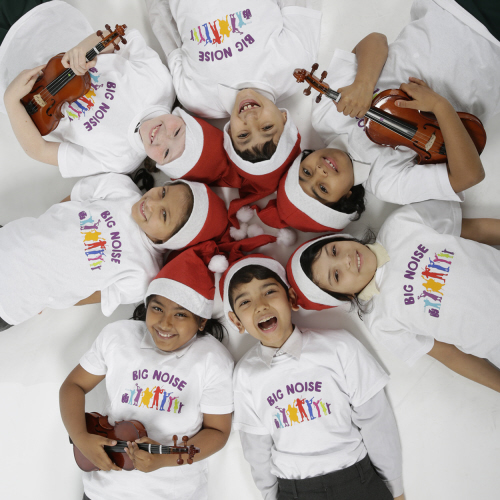 Young musicians from a deprived area of Glasgow are appearing on a Christmas card being sent to more than a million people around the UK.

The children, aged between seven and nine, are all members of the Big Noise orchestra in Govanhill run by the charity Sistema Scotland.

The youngsters were invited by the People’s Postcode Lottery to appear on their 2015 Christmas card, which is being sent to 1.2 million people across the country.

Alison Gornall, team leader at Big Noise Govanhill, said: “The picture shoot for the People’s Postcode Lottery Christmas card was such good fun for the children.

“It was the first time they had experienced something so exciting and they were delighted to be chosen to appear on the card – it made them feel very special indeed.

“They have been waiting patiently for the cards to be delivered so they can show them to their families and friends.”

Sistema Scotland is a charity which aims to create social change in some of the most deprived areas of the country through the participation of children in its Big Noise orchestras.

Aside from Govanhill, the charity also has centres in the Raploch area of Stirling and Torry, Aberdeen.

Sistema has so far received more than £500,000 in funding from players of the People’s Postcode Lottery.

“It has been our pleasure to see the charity progress and develop as a result of the funding, and we have also been honoured to have the Big Noise orchestra perform at our annual charity gala.

“The relationship is long-standing and we are delighted to have the orchestra feature on our annual Christmas card.”