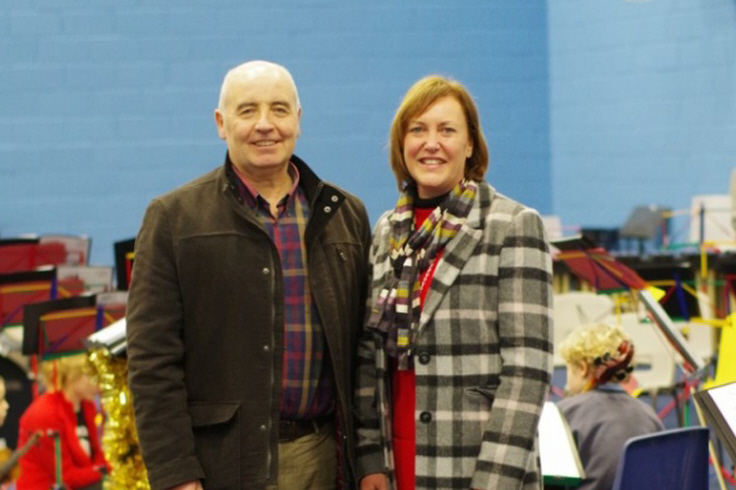 A Stirling couple have donated £100,000 to help support the work of Raploch’s Big Noise orchestra.

Coatbridge-born entrepreneur Tom Cox and his wife Alix McNicol-Cox are no strangers to good causes. The Stirling-based couple have donated over £1million pounds to a large number of deserving charities over the last few years and have spent a lot of time selecting the right organisations to support.

Supporting Big Noise however was “an easy decision” said Tom.

“I am not sure people realise the full extent of the work this orchestra does. It goes way beyond simply free music
lessons to something genuinely transformative, not just for a few children but for huge numbers. For me, it took about five seconds. I just got it, and it is a privilege to support this fantastic idea that originated in the poorer areas of Caracas and is now being delivered here in Stirling and in many other parts of the world.

“I hope there are others in Scotland that can also get behind this musical phenomenon. This programme will be truly life-changing for the children involved.”

Alix McNicol­-Cox said: “We have been so impressed by everything we have seen of Big Noise. The whole community seems electrified by this new generation of musicians growing up in its midst.  We are thrilled to be able to support that.”

Big Noise Raploch was launched in 2008 by the charity Sistema Scotland and was supported almost entirely by privately raised money in its first five years.

Sistema Scotland CEO Nicola Killean said: “We have a wonderful partnership with Stirling Council which now provides over 50% of the funding but we also rely a great deal on private support including money from players of the People’s Postcode Lottery and a number of trusts, foundations and individuals. Tom and Alix are the first individuals in the Stirling area to make such a substantial donation. We are very grateful. Wherever it comes from, money spent on Big Noise is an investment in the future of the children and the community.”

“We aim to give the children confidence, ambition and resilience to equip them for success across all areas of their lives.”

Big Noise Raploch currently works with 470 children and young people from babies to teenagers. A second centre was opened in Glasgow’s Govanhill in 2013 with a third launching in Aberdeen’s Torry next year.

The non-musical impacts of Big Noise are currently being assessed by the Glasgow Centre for Population Health, with inputs from Education Scotland, Audit Scotland and Glasgow Caledonia University. First major findings are expected in the Spring with plans to follow the children well into adulthood.

An earlier Scottish Government evaluation published in 2011 found: “there is evidence that Big Noise is having a positive impact on children’s personal and social development, including increased confidence, self esteem, a sense of achievement and pride, improved social skills, team working skills and expanded social networks. For those children with special educational needs, behaviour issues or unsettled home lives, particular benefits include a sense of belonging, improved ability to concentrate and focus on a task, a sense of responsibility and positive behaviour change.”