Sistema Scotland, the charity which runs the Big Noise programme for children living in disadvantaged areas, today announced that Richard Holloway, its visionary founder and Chairman, will retire from the Board in December 2018 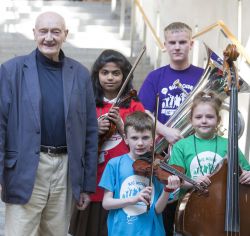 As Sistema Scotland marks its 10th birthday in 2018, and Richard celebrates his 85th birthday later in the year, the time is right to recognise Richard’s considerable achievements and look ahead to the next 10 years under the leadership of a new Chair. The Sistema Scotland Board has already commenced the process of recruiting Richard’s successor.

From working with an initial group of 35 children in the community of Raploch, Stirling in 2008, Sistema Scotland’s Big Noise programme has grown to reach over 2,500 children and young people in four centres across Scotland: Govanhill, Glasgow; Torry, Aberdeen; and Douglas, Dundee, as well as Raploch.

Big Noise uses the symphony orchestra and learning a musical instrument, via an immersive and intensive programme, as the tools to equip children with a wide range of social and life skills including confidence, resilience and aspiration. This enables children to reach their full potential and lead successful and fulfilled lives.

Under Richard’s leadership the charity has built up a body of independent research by the Scottish Government, Education Scotland and the Glasgow Centre for Population Health (GCPH) which has consistently found that Big Noise is transforming children’s lives through a wide range of positive impacts including engagement with education, developing life skills, securing emotional wellbeing, building social skills, encouraging healthy behaviours and offering respite and protection for some of our most vulnerable children.

For Richard, orchestral performance has been an integral part of the Big Noise programme and gives life-changing experiences to children in the most challenged communities. Big Noise has performed with Nicola Benedetti at the Glasgow Commonwealth Games opening ceremony in 2014 and launched the London 2012 Festival for the Olympic Games. This year saw 10th birthday performances by Big Noise at the Scottish Parliament for the First Minister of Scotland and MSPs, and BBC Biggest Weekend with members of the BBC Scottish Symphony Orchestra. Big Noise will also perform at the Glasgow Festival 2018 and BBC Proms in the Park later this year, as well as the many concerts the children perform in their own communities for family and friends.

Commenting on his decision to step down Richard Holloway, Chairman of Sistema Scotland, who is also a well-known writer and broadcaster, said: “The Big Noise adventure began for me 10 years ago in my youthful seventies. Watching Sistema Scotland’s glorious achievements over the last 10 years has been the greatest privilege of my life. I am extremely sad to be standing down as Chairman. I’ll be 85 in November and time is catching up with me, so I think I should now pass the baton onto someone who can run with it for the next 10 years and beyond.

“I owe a huge debt of gratitude to the Sistema Scotland Chief Executive, Nicola Killean, my fellow Board members and all the staff at Sistema Scotland. Their love and tireless dedication is transforming the precious young lives of the children we work with in communities across Scotland. And what I also admire most is the laughter I hear as they go about their task. Love and laughter - not a bad mantra for the social revolution that is Big Noise!

“The Board will now find a successor to me who is equipped with the skill and gifts to take the movement forward into its next decade of transformational change. They have already embarked on the search with professional thoroughness, and I am confident they will bring it to a successful and inspired conclusion. I’ll continue to play my part and rejoice in the 10th Birthday of Sistema Scotland until I stand down as Chairman at the end of the year. In the meantime on we go….

“I would also like to thank the many partners, supporters and funders who have come with me on this journey over the past 10 years. These include the Scottish Government, local authorities in Stirling, Glasgow, Aberdeen and Dundee, the charity Optimistic Sound in Dundee, players of People’s Postcode Lottery and the many individuals and trusts which have supported us. I hope they will stay with us for the next 10 years and well into the future.

”Maggie Cunningham, Deputy Chair of Sistema Scotland, said: “Richard achieved more in his eighth and ninth decade than most of us achieve in a lifetime. There can be no greater tribute to him than the positive impacts Big Noise is having on the lives of thousands of children across Scotland. The children who joined Big Noise Raploch in 2008 have grown into accomplished young people; resilient and confident. We bid Richard farewell from the Board with sadness, but his vision and inspiration will be alongside us as we renew our commitment to continue his work long into the future.”

Nicola Killean, Chief Executive Officer of Sistema Scotland, said: “It has been my privilege to work alongside Richard for over 10 years, converting his vision of transforming lives through music into the progressive charity we now see. Richard will remain an inspirational mentor and dear friend to me and the entire Sistema Scotland staff team as our founder. On behalf of the Big Noise children and families, and all the staff, I want to thank Richard for the belief he has always shown in us and send our love on his retirement from the Board.”

Sistema Scotland has created new jobs year on year, and currently employs 116 staff (or 73.8 full-time equivalent) at its Big Noise centres. Delivery of the programme also relies on volunteers, many of whom live in the communities where the programmes are based. Around 33,000 volunteer hours were worked over the past 10 years, with 81 volunteering opportunities each year.

The Board of Sistema Scotland has appointed search consultants Saxton Bampfylde to support the process of recruiting Richard’s successor. This will include an open advertisement. Further details will be published on the Sistema Scotland website.