Sistema Scotland, the charity which runs the Big Noise programme for children living in disadvantaged areas, today announced the appointment of Benny Higgins as its new Chairman. Benny, who grew up in Govanhill, where one of the charity's Big Noise centres is based, will succeed Richard Holloway, Sistema Scotland's founder, who will retire as Chairman of the Board in December 2018.

Benny will build on Richard's legacy which has seen the charity's Big Noise programme grow from working with an initial group of 35 children in the community of Raploch in Stirling in 2008, to reach more than 2,500 children and young people in four centres across Scotland: Govanhill, Glasgow; Torry, Aberdeen; and Douglas, Dundee; in addition to the original Raploch centre. 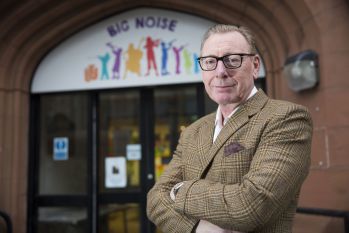 Big Noise is an inclusive, immersive and long-term programme using the symphony orchestra and learning a musical instrument as the tools to equip children with a wide range of social and life skills including confidence, resilience and aspiration. This enables children to reach their full potential and lead successful and fulfilled lives.

Over the past 10 years, Sistema Scotland has built up a body of independent research by the Scottish Government, Education Scotland and the Glasgow Centre for Population Health (GCPH) which has consistently found that Big Noise is transforming children's lives through a wide range of positive impacts including engagement with education, developing life skills, securing emotional wellbeing, building social skills, encouraging healthy behaviours and offering respite and protection for some of our most vulnerable children.

Benny joins the Sistema Scotland Board in November 2018 and will become Chairman from 12 December 2018.

Benny Higgins has held a number of senior executive roles in the banking sector, including with Standard Life, RBS, HBOS, and becoming Chief Executive of Tesco Bank in 2008. Under his leadership, Tesco Bank grew to serve more than 6 million customers with over 4,000 staff in Edinburgh, Glasgow and Newcastle. Benny was also Group Strategy Director for Tesco plc. He retired from Tesco in February 2018. In June 2018, Benny was appointed by the Scottish Government as strategic adviser for the establishment of the Scottish National Investment Bank. He is also Chairman of the National Galleries of Scotland amongst other roles.

Commenting on his appointment, Benny Higgins said: "I am convinced from my own experience, growing up in both Govanhill, a community where Big Noise now works, and nearby Toryglen, of the transformative power of the arts and music, and the vital importance of ensuring they are inclusive and open to all. That is why I am excited to be appointed Chairman of Sistema Scotland. The charity has achieved a huge amount in its first 10 years and there is compelling independent evidence of the benefits accruing to the children and young people taking part. I look forward very much to working with the Board, Chief Executive Nicola Killean and the full staff team as we look ahead to the next 10 years. In taking up this role, I would also like to pay tribute to Richard Holloway: Sistema Scotland is his gift to our country and I will make it my mission to continue and grow this vital work for the benefit of some of our most vulnerable children, young people and communities across Scotland."

Richard Holloway, founder and retiring Chairman of Sistema Scotland, said: "I am delighted that Benny Higgins is joining Sistema Scotland as Chairman of the Board. Benny brings extensive financial and business expertise coupled with the strategic vision to grow successful organisations. Together with his personal experience of both the communities we work in and the impact the arts has had on him, he is the perfect person to lead Sistema Scotland into the next 10 years. I would like to thank my fellow Board members who have led the rigorous and open process of recruiting Benny as my successor. I can't wait to see them continue to make an even bigger noise and transform the lives of more young people in Scotland."

Performance is an integral part of the Big Noise programme, building children's pride and confidence, and promoting community cohesion. To celebrate Sistema Scotland's tenth birthday in 2018, Big Noise children and young people have performed at the Scottish Parliament for the First Minister of Scotland and MSPs, at Glasgow Festival 2018, BBC Proms in the Park, the opening of V&A Dundee, as part of a series of Super Strings Sessions with the inspirational Big Sister to Big Noise, Nicola Benedetti, and at a range of concerts in their own communities for family and friends.

The role of Chairman of the Board of Sistema Scotland is an unpaid, part-time position with a time commitment of around 2-3 days per month.