Musicians make a Big Noise on tour of Italy

Big Noise Raploch Symphony Orchestra set off on a trip of a lifetime to Italy last week. They were invited to play in the William Walton Foundation Festival of Youth Orchestras on the island of Ischia.

The children and young people were also set to visit Rome and play at another music festival in the Basílica San Pancrazio. 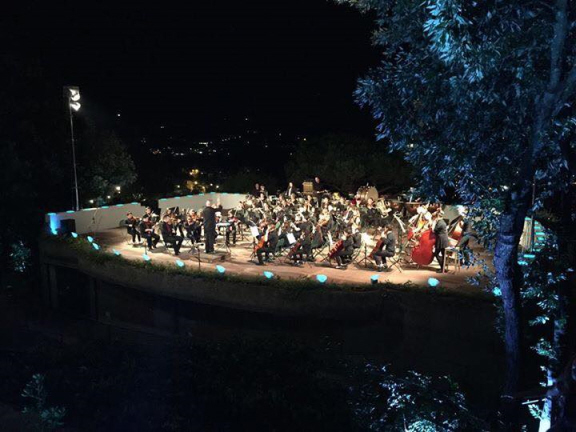 The five-day itinerary also included visits to Herculaneum, the Colosseum and the Roman Forum, and a marine archeo-bio tour on the island of Ischia.

Before heading off on the trip, team leader Peter Nicolson said: "This is an incredible opportunity for the Raploch Symphony Orchestra music to play at an international youth.

"Orchestras have been invited from across Europe to take part.

"As this is the first time the young people have been to Italy, we also wanted to make sure we made the best of this trip, so everyone will also have the chance to see some of the incredible signs of Italy”.

Fifty young people aged 11-18 and 15 staff set off on the trip, which was funded by the William Walton Foundation and other funders, including players of the People's Postcode Lottery.

Big Noise Raploch, which was launched in 2008 and receives substantial funding from Stirling Council, has almost 500 members from babies through to S6 age group. The Big Noise also recently celebrated a milestone, and were joined by some VIPs for a special concert.

It was the first public performance for the Junior Symphony Orchestra. Sistema Scotland works to create permanent social change in some of most deprived communities in Scotland.

They use participation in the Big Noise orchestra programmes to change lives by fostering confidence, discipline, teamwork, pride and aspiration in the children and young people taking part Stirling Provost Mike Robbins said: “I thoroughly enjoyed the concert and am proud that Stirling Council has been a key partner of Big Noise Raploch since its launch in 2008. Big Noise is about so much more than the music, and the excellent performance showcases the skills and confidence of these young people, which will help them succeed across all areas of their lives."

Musicians from Big Noise Raploch also joined local heroes and entertainers from across Scotland earlier this month as part of a 2000-strong historic 'Riding' procession down Edinburgh's Royal Mile. The event was the 21st century version of the colourful Riding, which first took place in the 17th century, to mark the opening of the fifth session of the Scottish Parliament.