We are delighted to have partnered with LINN to develop a Big Noise Mixtape, a playlist of music that has inspired Big Noise.  Read on to listen to the mixtape and learn the stories behind just a few of the tracks.

“Big Noise to me means music and life.  It doesn’t just improve your music skills, it improves your teamwork skills, your independence, your improvisation.  Some people think Big Noise is just a music group, but it is so much more than that to the people that take part.” - Big Noise participant

Listen to the full mixtape!

You can listen to the full mixtape by clicking one the links below: 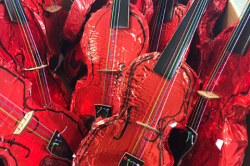 At Big Noise, children start playing string instruments (initially paper versions and then the real thing) from around 6 years old.  They play together in groups, developing concentration and teamwork.  One of the first pieces the children play together is called Big Joy, a simplified version of Beethoven’s Ode to Joy. 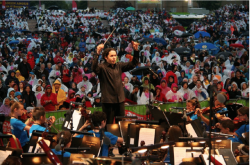 2012 saw Big Noise Raploch host the prestigious launch concert of the London 2012 Festival (the cultural programme accompanying the London 2012 Olympic Games).  The world-renowned Simón Bolívar Symphony Orchestra of Venezuela and conductor Gustavo Dudamel travelled to a field in Raploch for an open-air concert on midsummer’s night.  Not even the inevitable Scottish rain could dampen the elation felt by all the young people of Big Noise Raploch who performed the Rondeau from Abdelazer by Purcell and Beethoven’s Egmont Overture alongside the professional musicians of the orchestra, in front of a live audience of 7,000 people and a worldwide television audience. 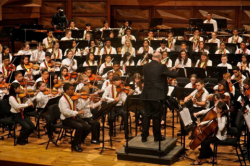 Danzón No 2 by Arturo Márquez is one of the most popular South American contemporary compositions.  It was the perfect piece for young people from Big Noise Raploch and Núcleo Montalbán to perform together when the Raploch young people took the trip of a lifetime in 2014: an eight day musical seminario in Caracas, Venezuela.  The young people rehearsed together, built friendships, learned about each other’s worlds, and gave a memorable performance that also included a medley of Scottish folk tunes. 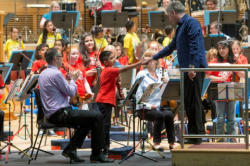 Inspired by hearing one of the young people singing in our Big Noise Govanhill centre, a member of our talented team orchestrated a version of the Roma anthem Djelem Djelem for a concert performed by the young people side-by-side with the BBC Scottish Symphony Orchestra in Glasgow’s City Halls.  This version of the song can be viewed on the BBC SSO website here.  In 2018, Big Noise Govanhill young people took part in a workshop and performance with the band Rose Room – the track January Blue reflects that collaboration. 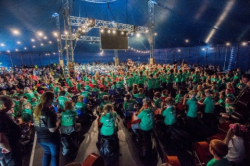 Big Noise Douglas was established thanks in large measure to the desire of the late singer-songwriter, Michael Marra, to bring a Big Noise programme to his home city of Dundee.  The launch concert, held in a circus tent in the heart of the Douglas community, saw 300 children perform to a crowd of 600 proud parents, friends and supporters.  The concert included a poignant rendition by the singer Alice Marra of her father’s song Hermless. 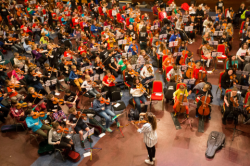 As well as being one of the most influential classical artists of her generation, Nicola Benedetti is musical ‘Big Sister’ to the Big Noise children and young people.  Nicola became involved with Sistema Scotland at a very early stage and since then has worked regularly with the Big Noise young people, sharing her passion, enthusiasm and inspiration.  In March 2020, 20 young people from Big Noise Torry were thrilled to take part in the Benedetti Sessions which included Bartók’s Romanian Folk Dances.

Big Noise continues to provide vital support for the children and young people’s emotional wellbeing and engagement with learning whatever the Covid-19 restrictions through a combination of live online sessions and pioneering Covid-safe face-to-face delivery (according to prevailing guidelines).

Our work is possible only with the generous support of partners, funders and donors.  Please Support the children and young people of Big Noise to continue benefiting from life-changing experiences through music.