Over the past few weeks, the children and young people who take part in the Big Noise programmes around Scotland have put on a special series of summer concerts.

The concert series which took place in a range of wonderful venues across Scotland marked another fantastic year for our participants and members of staff. For many of the children and young people that take part in Big Noise lessons, these concerts were the first opportunity for them to show off their musicianship in front of an audience since the beginning of the pandemic, and – in many cases – this was the first opportunity some participants had to perform in front of an audience at all. 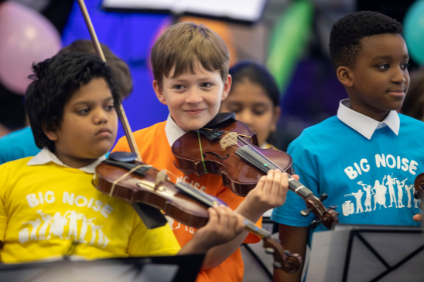 In Stirling - a decade on from the famed Big Concert of 2012 - children and young people treated community members to a number of special concerts celebrating the success of Big Noise in Raploch and more recently in Fallin.

2012 saw world-renowned conductor, Gustavo Dudamel, and the Simón Bolívar Symphony Orchestra of Venezuela play in Raploch side-by-side with young participants of Big Noise in a concert that was broadcast across the world. The event marked the official start of the 2012 Cultural Olympiad, ahead of London’s hosting of the Olympic Games that year.

This year’s flagship concert at the Church of the Holy Rude in Stirling’s city centre marked a particularly special moment, as some performers from the 2012 concert marked the 10th anniversary of that amazing event and celebrated the end-of-term. The concert brought together parents, carers, family and community members who gathered to acknowledge the hard work and efforts of the young performers and enjoy the chance to share in the music.

The concert was performed by Big Noise Raploch’s Symphony Orchestra, whose performers treated guests to a variety of music with something for everyone, be they a fan of Georges Bizet, Leonard Cohen or even Doctor Who! The Raploch Intergenerational Community Choir also took part with a rousing rendition of I Just Gotta Sing! by Suzzie Vango.

Over the past 14 years, the Big Noise programme in Raploch has become a cornerstone of the local community – and its effects are profound and wide reaching. As part of their long-term independent evaluation of the Big Noise model, the Glasgow Centre for Population Health found that taking part in Big Noise helps children to improve their concentration and language skills, enhance their problem solving and decision making, increase their self-esteem and develop strong friendships and support networks. 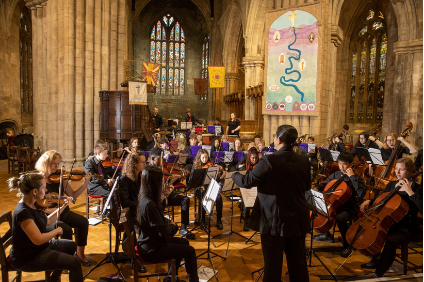 Elsewhere in the Central-Belt, the children and young people of Big Noise Govanhill put on a show of their own to celebrate their achievements over the past year. Having returned in a restricted capacity in late 2021, these were the first full-scale Big Noise Govanhill community concerts to take place since 2019. The performances at Elim Church in Govanhill brought together an impressive crowd of parents, carers, families and community members who gathered to celebrate another successful year for the Big Noise programme in the local community.

The children and young people of Big Noise Govanhill have worked extremely hard over the past year to learn new music and hone their skills, through varying degrees of Covid-19 restrictions in schools. Big Noise Govanhill’s adult community orchestra, Del Mondo, has also made considerable progress despite the heightened restrictions in place for gatherings of adults in the past 12 months. Children, young people and community members alike were able to perform at this year concerts on a scale not seen since before the pandemic.

The theme for the concerts was ‘coming together’ and this was reflected in the music performed, much of which explored welcoming and gathering. The pieces included one song sung in five different languages and another specifically written to welcome refugees to Scotland. The concert programme featured music from around the world, from Baroque-period concertos to renditions of big-screen Latin pop and from Ghanian folk songs to sea shanties. 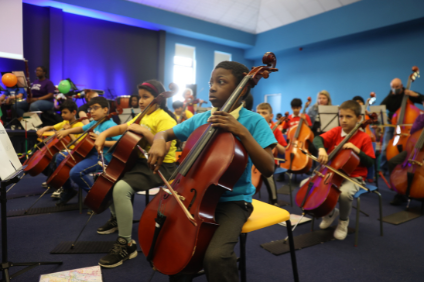 In Aberdeen, the children and young people of Big Noise Torry also put on a series of concerts to celebrate another year of the programme in the community. Performances took place at Tullos and Walker Road Primary Schools and in St Fittick’s Church and featured children from early primary school age through to S2.

The children and young people of Big Noise Torry have worked extremely hard over the past year to learn new music and hone their skills, through varying degrees of Covid-19 restrictions in schools, which have limited their opportunities to learn and perform together. However, they have still had a fantastic year. Older participants were commissioned to make music by the Children and Young People's Commissioner Scotland, which has been used on a series of 18 podcasts that celebrate the rights of children and young people. Big Noise Torry also recently performed a lunch concert for the public at the Cowdray Hall.

The concerts featured a range of music genres and styles, showcasing the effort and enthusiasm of the participants and including pieces such as ‘Right Here Right Now’, ‘Samba Celtica’ and ‘Homage à Bartók’.  Big Noise Torry’s adult community orchestra, The Noise, has also made considerable progress despite the heightened restrictions in place for gatherings of adults in the past 12 months. The Noise also performed at the summer community concerts. 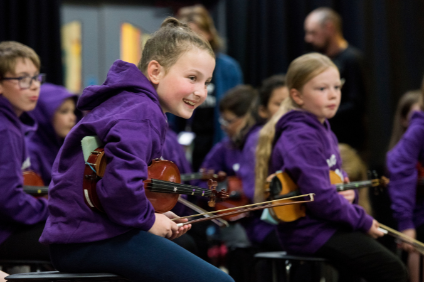 Big Noise Douglas was also delighted to host a series of community concerts celebrating the hard work and efforts of its participants and the much-missed opportunity to bring families and friends together to see them perform. The concerts, which featured performances by children from Primary 3 to Primary 7 took place at Claypotts Castle Primary School and St. Pius RC Primary School.

The children and young people of Big Noise Douglas have worked extremely hard over the past year in their efforts to learn new music and hone their skills, all whilst dealing with varying degrees of Covid-19 restrictions in schools which have limited their opportunities to learn and perform together. However, these obstacles didn’t stop the participants having another incredibly successful year. As well as taking part in this week’s community concerts, participants of the Big Noise programme in Douglas recently showed off their musical skills by taking to the main stage at WestFest – a community and culture festival in the west of Dundee.

Friends, parents, and carers in attendance were treated to an exciting programme of music, featuring a range of different musical styles, which showcased the effort and enthusiasm of Big Noise participants. Highlights included renditions of some of the children’s favourite songs such as ‘Grumpy Pirate’ and ‘Shooting Star’ – which had audience members clapping, singing, and dancing along to the music. 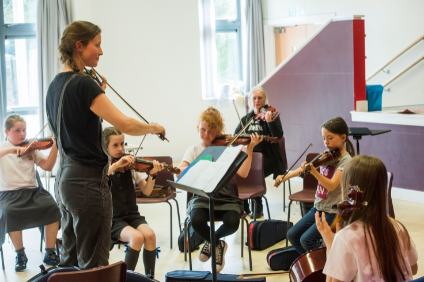 As a whole, the concert series celebrating Big Noise was a roaring success, and was the perfect way to celebrate another successful year across of programmes across Scotland. We would like to thank every one of the children and young people that have taken part in Big Noise sessions this year. Your hard work, determination, and your enduring passion for playing music throughout the year made this concert season a joy for all involved, and we cannot wait to see you perform again soon.

The team at Sistema Scotland and all of our Big Noise programmes would like to thank the wonderful communities we work with for making this another concert season to remember. Across Scotland, our work is only possible because of the continued cooperation and support of each individual community – so it was fantastic to be able to welcome you all back. We’d also like to extend a special thanks to our supporters and funders - without whom the work of the Big Noise programmes across the country would not be possible.