Big Noise Raploch youngsters from Stirling received the experience of a lifetime when they were given music lessons by two of the world's finest musicians during a special visit to Berlin. 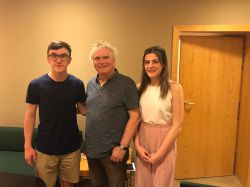 And the occasion was made extra special as it was Sir Simon Rattle’s last concert in the Philharmonie as Chief Conductor of the orchestra – a post he has held since 2002.

Charity Sistema Scotland runs the Big Noise programme, supported by Stirling Council, the Scottish Government and players of People’s Postcode Lottery, using music to transform the lives of children living in disadvantaged communities. It uses the symphony orchestra and learning a musical instrument, via an immersive and intensive programme, as the tools to equip children with a wide range of social and life skills including confidence, resilience and aspiration.

Accompanied by Big Noise Raploch senior musicians, Jo Ashcroft and David Munn, the young people attended one of the two sell-out concerts in front of 2,400 people which was live-streamed to countries throughout the world. In addition to their lessons, the young musicians were also given a private tour of the building and had the opportunity to meet Sir Simon to ask him a couple of questions about his life and work.

Lewis is the first Big Noise musician to be offered a conditional place to study at the prestigious Royal Conservatoire of Scotland in Glasgow. Symone first picked up her Big Noise instrument seven years ago, whilst Lewis joined the programme in 2010. They have both been taking part in the RCS and National Youth Orchestra of Scotland Junior and Senior orchestras for a number of years, and Symone has also participated in the NYOS Jazz Summer School.

In May this year they joined children and young people from Big Noise centres in Raploch, Stirling; Govanhill, Glasgow; Torry, Aberdeen and Douglas, Dundee to perform at a reception to celebrate the 10th birthday of Sistema Scotland and Big Noise with First Minister Nicola Sturgeon and cross-party MSPs in the Scottish Parliament.

Earlier this year Lewis performed as part of the National Youth Orchestra of Great Britain’s Inspire Orchestra at the Barbican in London.

The group were invited to Berlin by Fergus McWilliam, Sistema Scotland board member, who plays French Horn with the Berlin Philharmonic orchestra. Lewis, a former pupil of Wallace High School, was given a lesson by Principal Oboe Jonathan Kelly, while trombonist Jesper Busk Sorensen tutored Symone, who currently attends St Modan’s High School in Stirling.

Nicola Killean, Chief Executive of Sistema Scotland, said: “This was a once-in-a-lifetime opportunity for Lewis and Symone, who have shown a keen interest in pursuing a career in music, to be tutored by two of the world’s finest musicians.

“It is very rare for the children to be given the chance to have a one-to-one lesson with musicians of this high calibre and they had a fantastic time and learned so much. We would like to thank Sir Simon Rattle, Fergus McWilliam and the musicians for giving up their valuable time to tutor Lewis and Symone, who described the experience as ‘life-changing and inspirational’.”

More than 2,500 children participate in the Big Noise programmes each week at centres in   Raploch, Stirling; Govanhill, Glasgow; Torry, Aberdeen; as well as Douglas in Dundee. Independent research shows that Big Noise has a wide range of positive impacts including engagement with education, developing life skills, securing emotional wellbeing, building social skills, encouraging healthy behaviours and offering respite and protection for some of our most vulnerable children.

Research also found examples of outstanding teaching. Big Noise musicians, staff members and volunteers act as role models, supporting children from babies through to young adults in music and other areas of their lives.