The BBC Scottish Symphony Orchestra (BBC SSO), with Big Noise Govanhill, is to take up residence in a Glasgow secondary school as it builds up to a special one-off concert, which will inspire and entertain young musicians, as well as their families, friends and the community at large. 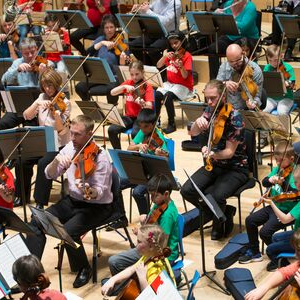 The unique five-day long residency, at Holyrood Secondary School on Glasgow's south side, will see members of the orchestra work closely with young musicians from Holyrood and Shawlands Academy, as well as pupils from surrounding primary schools. Several of the participants have been immersed in music since they were tiny thanks to Big Noise Govanhill.

The young people will be taking part in a host of inspiring musical activities; from concerts to songwriting to side-by-side coaching, from Tuesday 1 to Saturday 5 October, working closely with members of the oldest professional orchestra in Scotland.

Groups of children from Big Noise Govanhill will join senior pupils from Holyrood and Shawlands Academy for these music lessons with a difference. The grand finale will be a performance on Saturday 5 October for the surrounding community by the BBC SSO and the young musicians.

The adjacent community sports facility, Glasgow Club Holyrood, will become a concert hall for the performance.

For many of the youngsters, this will be their first live taste of a full orchestra in concert - and it's happening on their own doorstep.

Big Noise Govanhill, which is Sistema Scotland's second Big Noise centre, has been working with children from St Bride's, Holy Cross, Annette Street and Cuthbertson Primary Schools in Govanhill since 2013, bringing the charity's unique brand of immersive musical activity to around 1,200 sets of receptive young ears in the process.

Holyrood Secondary School's head teacher, Sharon Watson, says: "Music brings people together and this is a fantastic opportunity for both Holyrood and the community at large. We have over 60 languages spoken in school and that brings with it an incredibly rich cultural offering, especially when it comes to music.

"We can't wait to welcome the BBC SSO and Big Noise Govanhill. To have a full symphony orchestra play a concert on our doorstep is a once-in-a-lifetime experience. For many of our pupils it will be the first time they have seen a full orchestra play.

Dominic Parker, director of the BBC SSO, says: "Sharing music with people of all ages across the country is a vital part of the BBC SSO's mission. And it's particularly exciting to be doing this in our hometown with our decade-long partners Sistema Scotland. Taking up residence in a school is always inspiring for everyone and we look forward to bringing the buzz and excitement of live orchestral music to as many pupils as possible - and the wider community as a whole."

A large number of the Big Noise Govanhill children have now moved up to high school and they will form part of the orchestra which will play from the BBC Ten Pieces repertoire. This ground-breaking scheme helps classroom teachers and ensemble leaders open up the world of classical music to 7-14 year olds.

Ali Gornall, Team Leader at Big Noise Govanhill says: "This is an amazing opportunity for our children and young people to learn from, and perform alongside, the wonderful musicians of the BBC SSO.

"Sistema Scotland is committed to transforming lives through music and supporting children to take part in unique orchestral experiences that open new windows on the world. This BBC SSO residency will be a long-lasting memory for the children and young people of Big Noise Govanhill, other young instrumentalists and families involved."

Music presenter and singer, Lucy Drever, who was part of the BBC SSO's Campbeltown residency last year, will host workshops throughout the week and will present the concert on the Saturday, while young French conductor Chloé van Soeterstède will take to the podium to lead the orchestra.

The Holyrood residency is presented by the BBC Scottish Symphony Orchestra in partnership with Sistema Scotland and Holyrood Secondary with support from Glasgow's instrumental music service CREATE.